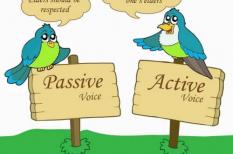 1. Mary types letters in the office.

2. His father will help you tomorrow.

5. They are learning English in the room.

6. Nothing can change my mind.

8. I don’t know her telephone number

9. My students will bring the children home.

10. They sent me a present last week. 11. She gave us more information.

12. The chief engineer was instructing all the workers of the plan.

14. Somebody has taken some of my books away.

15. They will hold the meeting before May Day.

16. They have to repair the engine of the car.

17. The boys broke the window and took away some pictures.

18. People spend a lot of money on advertising every day.

19. Teacher is going to tell a story.

20. Mary is cutting a cake with a sharp knife.

21. The children looked at the woman with a red hat.

22. They have provided the victims with food and clothing.

23. People speak English in almost every corner of the world.

25. After class, one of the students always erases the chalk board.

1. Letters are typed in the office by Mary.

2. You’ll be helped by his father tomorrow.

3. The human life has completely been changed with science and technology.

4. This bottle was broken by Peter.

5. English is being learnt in the room.

9. The children will be brought home by my students.

11. We were given more information.

12. All the workers of the plan were being instructed by the chief engineer.

14. Some of my books have been taken away.

15. The meeting will be held before May Day.

16. The engine of the car has to be repaired.

17. The window was broken and some pictures were taken away by the boys.

18. A lot of money is spent on advertising every day.

20. A cake is being cut with a sharp knife by Mary.

21. The woman with a red hat was looked at by the children.

22. The victims have been provided with food and clothing.

23. English is spoken in almost every corner of the world.

25. After class, the chalk board is always erased by one of the students.

1. They told me that you were the best architect in this city.

2. She reported that the flowers were killed by frost.

3. Some people inform me that the director is going to take a business trip to England.

4. That officer announced that the meeting was delayed until next week.

5. He discovered that this cotton was grown in Egypt.

6. They promise that the performance will start on time.

7. He recommends that we should stay at the city center.

8. We believed that Alice would pass the driving test.

9. The director notifies all the workers that they will have to work extra hard this month.

10. They have persuaded me that they will go with me to the stadium.

11. They have decided that the company will go to the beach together at the weekend.

12. People think that Maradona is the best football player in the 20th century.

13. They find that the job is not suitable for a girl like her.

14. The teacher explained that this powerful engine pulled the train.

15. He told me that his football team had played well last season.

1. I was told that you were the architect in this city.

3. I am informed that the director is going to take a business trip to England.

4. It was announced that the meeting was delayed until next week.

5. It was discovered that this cotton was grown in Egypt.

6. It is promised that the performance will start on time.

7. It is recommended that we should stay at the city center.

9. All the workers are notified that they will have to work extra hard this month.

10. I have been persuaded that they will go with me to the stadium.

11. It has been decided that the company will go to the beach together at the weekend.

14. It was explained that this powerful engine pulled the train.

15. I was told that his football team had played well last season.

1. I had my nephew paint the gate last week.

2. She will have Peter wash her car tomorrow.

3. They have her tell the story again.

4. John gets his sister to clean his shirt.

5. Anne had had a friend type her composition.

6. Rick will have a barber cut his hair.

7. I will get the dressmaker to make a new dress.

8. He had a mechanic repair his car.

9. She often gets the technician to maintain the heater.

10. They had the police arrest the shoplifter.

11. Are you going to have the shoemaker repair your shoes?

12. I must have the dentist check my teeth.

13. She will have a veterinary surgeon examine her dog.

14. We had a man take this photograph when we were on holiday last summer.

15. The Greens had a carpet cleaner clean their carpet.

1. I had the gate painted last week.

2. She will have her car washed tomorrow.

3. They have the story told again.

4. John gets his shirt cleaned.

5. Anne has had her composition typed.

6. Rick will have his hair cut.

8. He had his car repaired.

9. She often gets the heater maintained.

10. They had the shoplifter arrested.

11. Are you going to have your shoes repaired?

13. She will have her dog examined.

14. We had this photograph taken when we were on holiday last summer.

15. The Greens had their carpet cleaned.

A. is being cleaned

B. are being cleaned

C. will be cleaned

D. would be cleaned

B. have been operated

C. has been operated

D. All are wrong.

A. must be find

C. should be finds

D. must be found

A. are being watched

B. was being watched

C. is being watched

D. All are wrong.

A. are taken / cleaned / is checked

B. is taken / is cleaned / is checked

C. was taken / was cleaned / was checked

D. is taken / is cleaned / checked

A. must be cleaned

D. No answer is right

A. will be continued 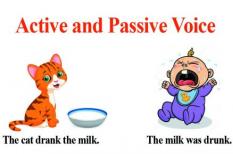 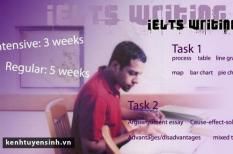